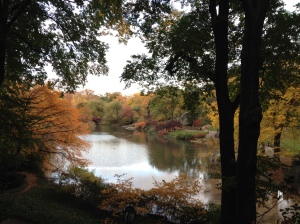 “One sort of optional thing you might do is to realize that there are six seasons instead of four.  The poetry of four seasons is all wrong for this part of the planet, and this may explain why we are so depressed so much of the time.  I mean, spring doesn’t feel like spring a lot of the time, and November is all wrong for autumn, and so on.  Here is the truth about the seasons: Spring is May and June.  What could be springier than May and June?  Summer is July and August.  Really hot, right?  Autumn is September and October.  See the pumpkins?  Smell those burning leaves?  Next comes the season called Locking.  That is when nature shuts everything down.  November and December aren’t winter.  They’re Locking.  Next comes winter, January and February.  Boy!  Are they ever cold!  What comes next?  Not spring.  ‘Unlocking’ comes next.  What else could cruel March and only slightly less cruel April be?  March and April are not spring.  They are Unlocking.”

My grandfather, who was born and raised in the Albany area, always had a terribly optimistic line for not-so-fun situations.  Like, while scraping ice of his Oldsmobile windshield on skin-crackingly bitter cold days, he’d declare, Oh, the joys of living in the great northeast!  My mom likes to say that he had a lot of regional pride.

It’s been a little dismal here in the great northeast with short days, naked trees, and a chill that works its way to the center of your bones.  Clearly, we’re in the midst of the season of Locking.

On shivery days, I just want to fill my world with coziness.  Chili and Chinon, I say!

At least this new(ly named) season is less sticky than the one they dreamed up in Bartholomew and the Oobleck.  Ewww!

Anyhow, below are some of my wine-drinking adventures during this first month of Locking.  They’re all pretty cheerful.

If you’re looking for some Thanksgiving wine inspiration, Eric Asimov pretty much says it all (and says it best), here.  “As far as wine goes, turkey is like a big, friendly pooch; it pretty much cozies up to anything you serve.”. 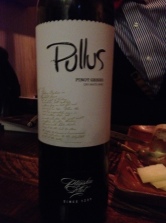 “Pink” Pinot Grigio from Pullus in Slovenia.  Frizzante.  Copper-colored from skin contact- as it should be.

Gamay from the village of Brouilly.  Chateau des Tours.