The End of the World

What comes to mind when you think of Portugal? I always think of this bag that I used to have.  It was a sturdy knit material with wooden handles and covered with figures of shadows of people dancing.  My mom picked it up while traveling in Portugal years ago.  I loved the look of it and the feeling of carrying around something so interesting, but I lost it at some point during college (Oops. Sorry, Mom).

I think of Vinho Verde too, especially since we are coming into that sultry time of year when we pretty much  start drinking it in place of water.  And even though Vinho Verde comes from Minho in the far north, and this Gourmet Holiday piece that I want to share with you is a compilation of its author’s travels around the towns of Algarve in the south of that rectangular country, I thought I’d pass along some of my favorite bits of its pages…written almost a whole 30 years ago…oh boy… 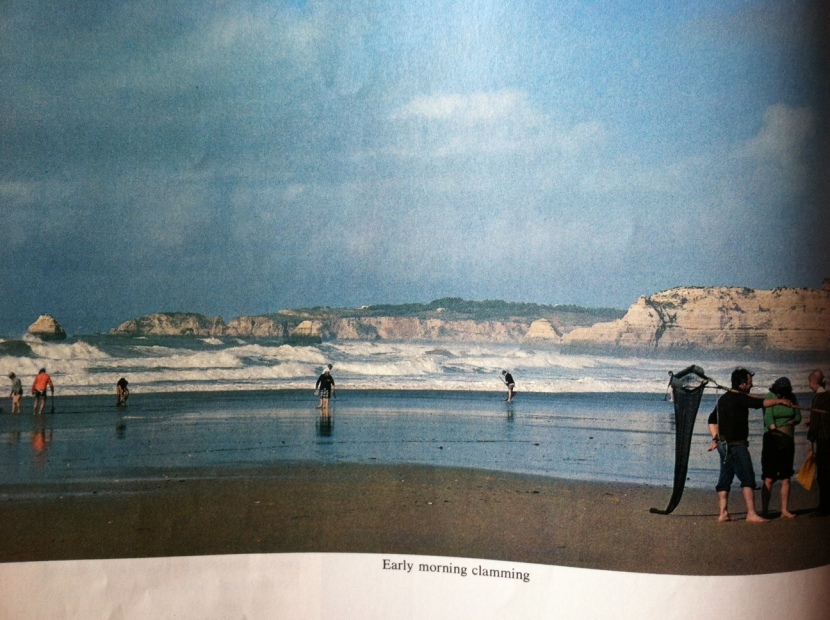 The Hundred-Mile Coast of the Algarve, Portugal’s southernmost province, stretches from the deltas of the Guardiana and the Spanish border in the east to the romantic promontories of Sagres and Cape Saint Vincent in the west. It was from this rocky coast, called the “fim do mundo” because it was the end of the then known world, that Dom Henrique o Navegador (Henry the Navigator) planned his eventual sea routes to India.

The Algarve derives its name from the Arabic “el gharb”, which means “the land beyond”. The Arabs occupied the area for several hundred years until the Christian reconquest toward the end of the thirteenth century, and they left behind- among many things both tangible and intangible- the tall fretted chimneys, like vestigial minarets, that grace the low, white farmhouses.

Just along the coast from Quinta do Lago is the archetypal fishing village of Albufeira. Its exquisite little chaurches and houses terraced down the hillside, all white and terra-cotta, and its stout painted boats drawn up by the harbor are irresistibly picturesque. A myriad of boutiques, cafes, restaurants, and discotheques cater to the thousands of people drawn to the village. 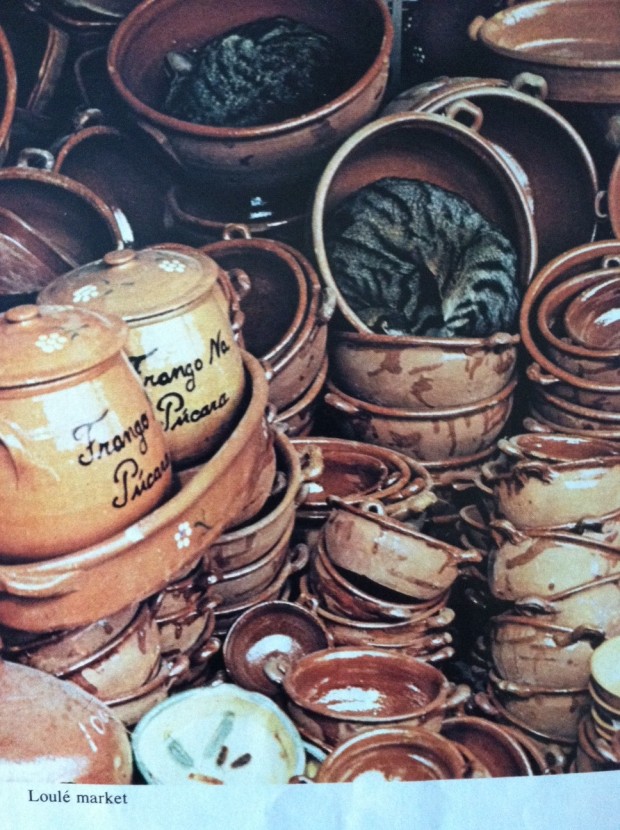 Portugal is still rewarding territory for antiques and bric-a-brac o of all kinds, and walking through the Arco da Vila into the old town that curls up behind the harbor I found a treasure of its kind, Galeria da Se, in a corner of Cathedral Square. Its floorboards so rickety that everything tinkles and shakes as one moves around, the shop is crammed with old pewter and silver, faience plates, scraps of silk, gilded cherubs, alabaster urns, and candelabra, as well as furniture, much of it from dismantled convents. 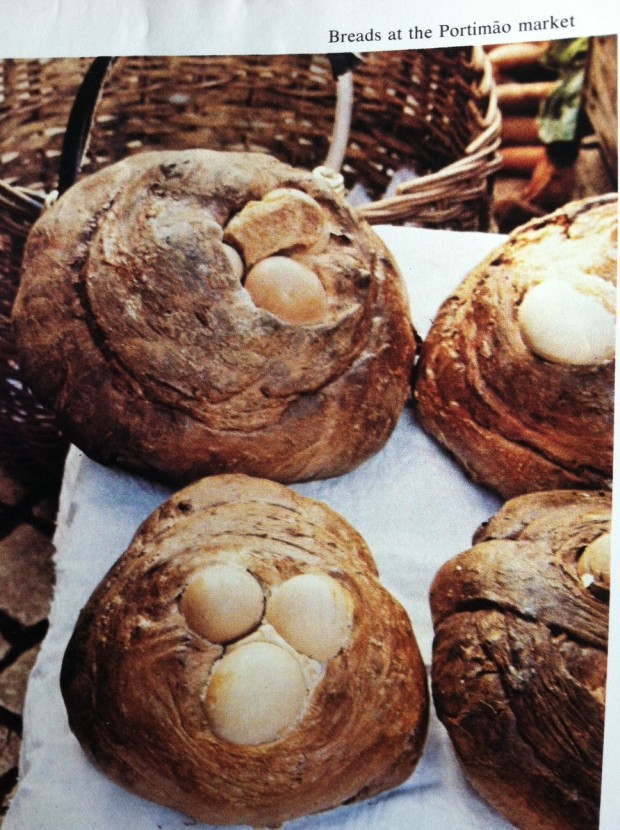 A friendly, prosperous town, Faro has for its size a prodigious number of shoe shops, chemists, and banks, including one whose name always delights me, the Espirito Santo (Holy Ghost). The port’s prevailing smells are a bouquet of sea salt, tar, and fish, combined with crushed olives, vanilla, baking bread, and freshly ground coffee. 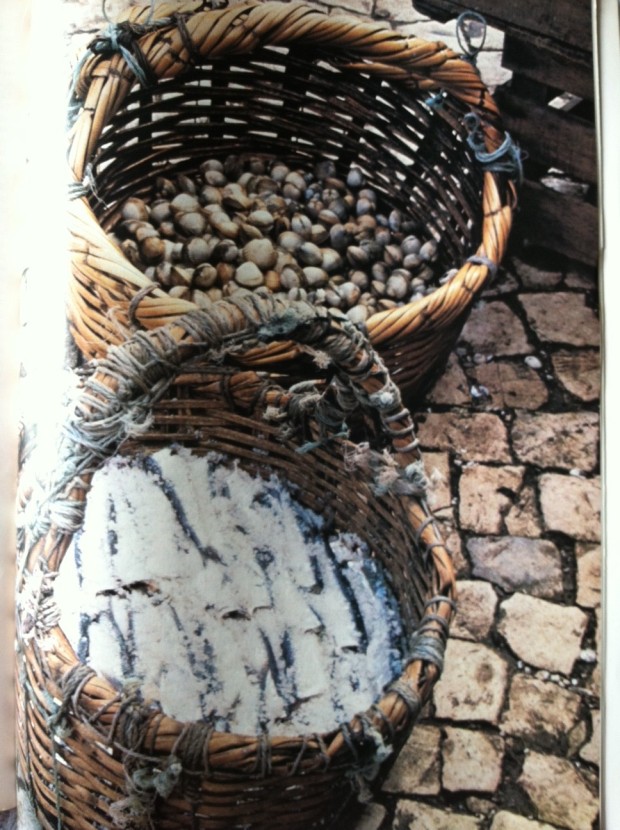 Praia da Rocha was the original watering place of the Algarve. It was a going concern long before the coast became fashionable, as witness to some charming old villas and the endearingly Victorian-looking BELLA VISTA, which ruled the hotel roost of its day. It is the natural resort for Portimao, the biggest and busiest port on the coast. Here sardine and tuna canning and boat building account for much of the activity- as does the morning fish market, which is quite a sight (and sound) to behold.

The ducklings, crisp outside and succulently tender within, were prepared with the apparent simplicity of a master hand and garnished only with a sliver or two of orange. But art conceals art, and the preparation was not as simple as it seemed. With the ducklings we drank a light red wine from the Duoro. 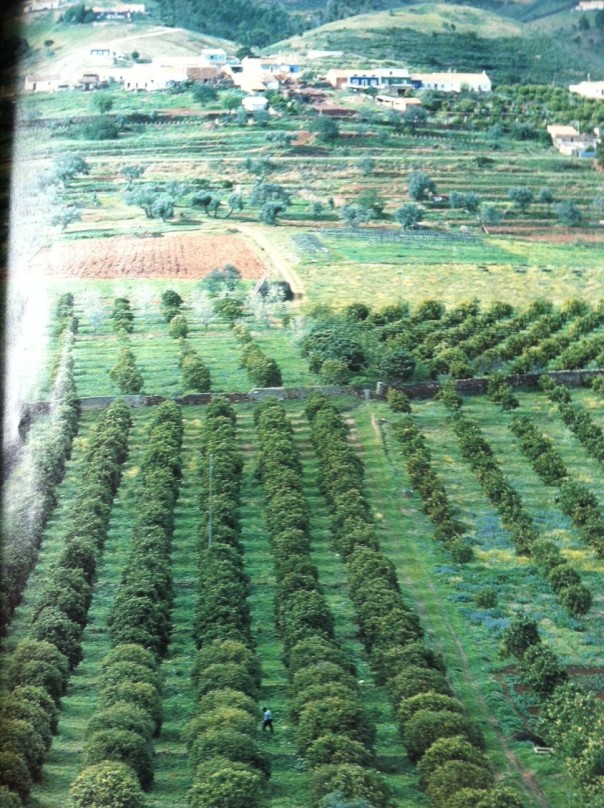 It is heading westward toward Sagres that one finds some of the most unsullied stretches of both coast and country: fields striped with crops, low, white farmhouses, and villages where the pastel-colored church belfries tower like huge Baroque flowers over the orchards…Sagres was the sacred promontory (hence. its name) where, the ancients believed, the sinking sun sizzled as it fell off the end of the world into the sea.